The intestine is one of the largest organs in the dog's body and apart from digestion it takes on many important tasks in the body. However, if the sensitive balance of the intestine is disturbed, it can also be the source of many problems or diseases. Reason enough to take a closer look at this important organ.

The intestine and its tasks

The main task of the intestine is, of course, digestion and without it we and our four-legged friends would simply starve to death. This is because the digested stomach contents are broken down further there so that the dog can absorb nutrients and fluids from the food into the organism.  But the intestine is not only used to absorb nutrients, it is also involved in the removal of metabolic products from the body. For example, “waste products” from the liver are released into the digestive tract via the bile and eliminated with the faeces.

These two tasks are well known to most people, but did you know that the intestinal mucosa also plays a decisive role in immune defence? About 2/3 of all antibody-producing cells are located in the so-called intestine-associated immune system.

However, the intestine cannot do all this on its own, but is helped by countless millions of bacteria that mainly colonise the large intestine – also called intestinal flora or intestinal microbiome. Without them, we and our dogs would not be able to break down or metabolise fibre, for example. In addition, the bacteria there produce vital vitamins and hormones for the body and “train” the immune system. In the meantime, studies and investigations have shown that the organisms in the intestines are not only digestive aids, but also influence the health of dogs to a much greater extent than previously assumed.

When the intestine gets out of balance

A healthy intestine and intact intestinal flora is therefore not only important for good digestion, but also ensures that the dog stays fit and healthy. However, the sensitive balance of intestinal bacteria is very quickly disturbed, e.g. by stress, illnesses, medication or the wrong diet. The “bad” bacteria get the upper hand and increasingly displace the vital good micro-organisms – this is then referred to as a bad colonisation. The consequences can include flatulence, abdominal pain, diarrhoea or digestive disorders.

How to keep your dog’s gut healthy

Not surprisingly, the dog’s diet plays a decisive role in intestinal health. In addition to a balanced and healthy diet, certain ingredients and food components can positively influence the intestinal flora and thus the digestion and prevent faulty colonisation.
One of these important food components are the so-called dietary fibres. These are largely indigestible components of predominantly plant-based foods (e.g. cereals, fruit, vegetables), which can be divided into soluble and insoluble dietary fibres. The soluble dietary fibres such as inulin or pectin serve as “food” for the good intestinal bacteria and are therefore also called prebiotics. Water-insoluble dietary fibres (e.g. cellulose), on the other hand, promote intestinal peristalsis in dogs and thus ensure that the food pulp does not remain too long in the digestive tract and can be excreted more easily. When feeding your dog, you should therefore ensure that it has a sufficiently high dietary fibre content. Foods with a high fibre content include apples, carrots, fennel, potato, psyllium, Jerusalem artichokes or oats.In addition to prebiotics, which promote the growth of beneficial intestinal bacteria, so-called probiotics are also being used more and more. Probiotics already contain viable, valuable microorganisms. In dogs, the bacterial strains Enterococcus faecium and Lactobacillus acidophilus are particularly suitable probiotics. 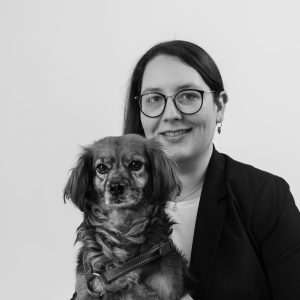 Our responsible veterinarian, Dr. med. vet. Stefanie Mallmann, ensures that the quality of our care products is constantly developed and improved through veterinary knowledge and experience. Together with pharmacists and laboratory experts, she develops new formulations and products that are real "problem solvers". This ensures that all LILA LOVES IT products make sense and really help improve the lives and well-being of our dogs.

Privacy Policy |  Imprint | Terms & Conditions | Instructions on cancellation
Manage cookie consent
To provide you with an optimal experience, we use technologies such as cookies to store or access device information. If you consent to these technologies, we may process data such as browsing behavior or unique IDs on this website. If you do not give or withdraw your consent, certain features and functions may be affected.
Manage options Manage services Manage vendors Read more about these purposes
Show preferences
{title} {title} {title}