Rated 5 out of 5 based on 2 customer ratings
(2)
Apples, pears and banana, topped with coconut and papaya. FRUITY-GOODIES are the sweetest treat LILA LOVES IT can offer. So delicious, even die-hard carnivores cannot resist. Mehr ErfahrenRead more 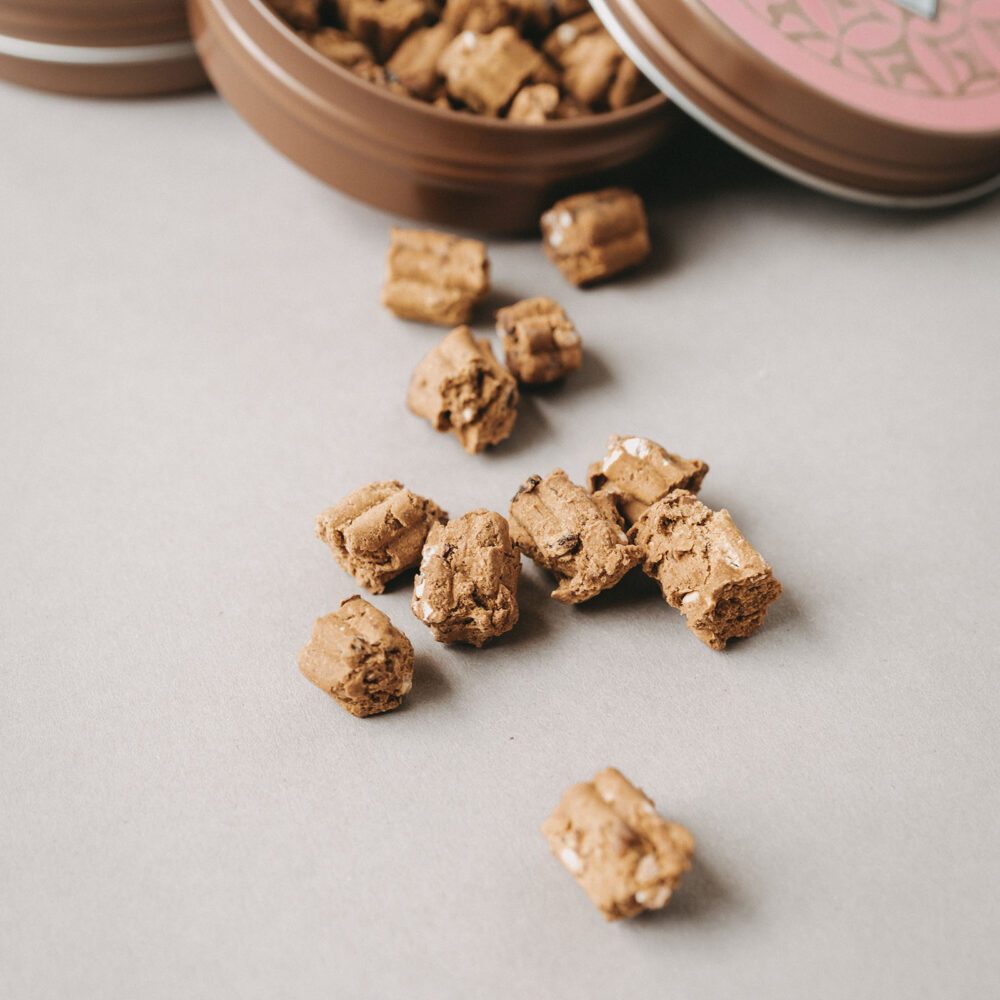 Dogs are carnivorous animals, but like many carnivores they do not let systematic biology dictate their diet. Unlike wolves, dogs are able digest plant carbohydrates. Fortunately! Because dogs love the sweet taste of fruits and vegetables. Our FRUITY-GOODIES are vegan super treats. Packed with vitamins and rich in calcium thanks to buckwheat.

All our goodies are lovingly packed in the Caritas Brucker Werkstatt for people with disabilities just a few kilometers away from our warehouse. The Brucker Werkstatt is a facility for participation and integration into working life.

All LILA LOVES IT treats are free of preservatives, flavor enhancers, colorants, sweeteners and sugar.

30% dried apple. Apples are rich in vitamins C, biotin, vitamin K and A. Biotin supports the metabolism of your four-legged friend and is essential for coat and claws. Vitamin K keeps blood clotting going and supports intestinal movement.

Buckwheat is a knotweed plant and forms small seeds that resemble miniature beechnuts. Thanks to its slightly nutty taste, buckwheat is a popular ingredient in dog bowls.

8 % dried pear - a well-tolerated fruit with a dehydrating effect.

8 % coconut flour. Coconut flour is considered a superfood because it provides valuable energy, vegetable protein and healthy fatty acids. It is a benefit for the dog's intestines, as excess fat has been removed from the flour. Rich in fibre, free of gluten, phytic acid, cholesterol and low in fat, it combines all the good qualities of a healthy raw material that is ideally tolerated even by dogs suffering from allergies.

Potato flour is a particularly good alternative for dogs suffering from an allergy to cereals.

5 % fresh banana. Bananas are said to contain a lot of magnesium. This is true, but bananas are fruits that contain many more valuable ingredients. They are full of vitamins and minerals, including potassium and vitamin C - and of course the well-known magnesium.

2 % dried papaya. Papayas contain particularly high levels of vitamin C and also provitamin A. In addition, the fruit consists of almost 90 percent water and is not strong even when fully ripe Papayas are also suppliers of iron, sodium, potassium and calcium. In the case of weak anaemia, papaya can also provide relief and balance for dogs.

Coconut oil has a melting point of around 25°C. At cooler temperatures it is solid, but melts on contact with the skin. Coconut oil penetrates the skin very quickly and has an immediate smoothing and moisturising effect without leaving a greasy film. In addition, it absorbs body heat when melting and thus has a slightly cooling effect - very pleasant for irritated skin. Melting and quick absorption make coconut oil feel very soft and flattering. Furthermore, coconut oil has a slightly deodorising effect due to certain fatty acids that are toxic to some bacteria. Together with turmeric, coconut oil is considered an insider tip for natural tooth whitening. From controlled organic cultivation.

2 % dried pineapple. The tropical fruit is rich in potassium, vitamin C and trace elements such as manganese, iron, copper and zinc. Dogs find pineapple very tasty because of its sweetness.

Turmeric is a superfood that may have anti-inflammatory properties due to the curcumin it contains.

If treats are used a lot in dog training, it can be useful to adjust the amount of normal food. Especially for growing dogs or dogs that tend to be overweight, qualified nutritional advice can help. 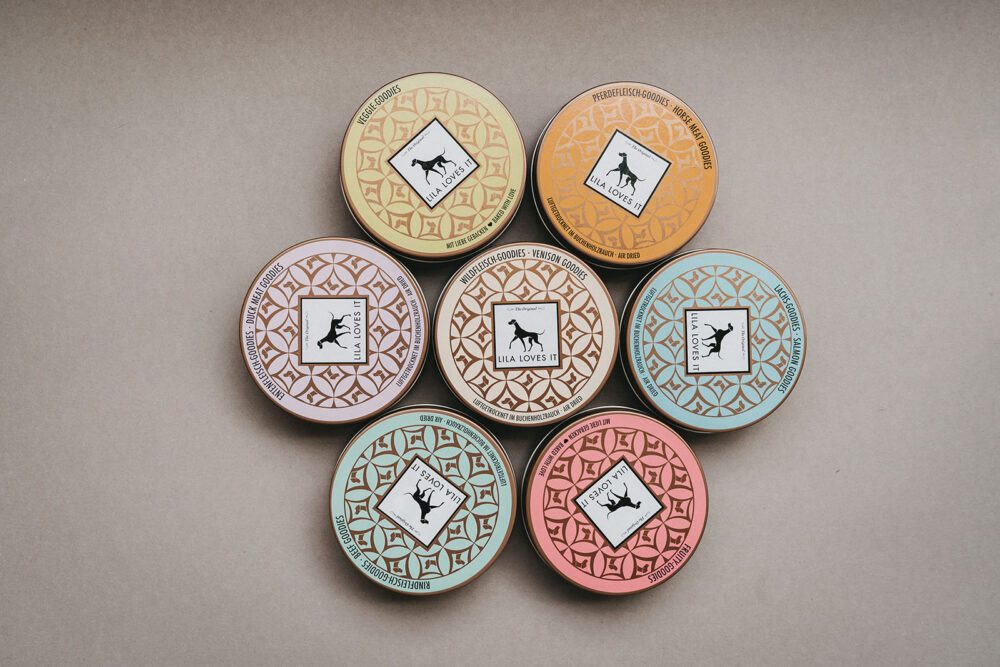 Dogs who like Fruity Goodies will also enjoy our vegetarian VEGGIE GOODIES made with delicious vegetables and tangy cheese.

Rewards are a must

Rewards play an important role in modern dog training. What we humans often ignore: What is a reward is decided by the receiver (dog) and not the sender (human)! So in order to reward our dogs properly, we need to know what they like. Kristina Obermayr, our wonderfully funny and clever and empathetic expert on dog-human relationships, explains why in our magazine. 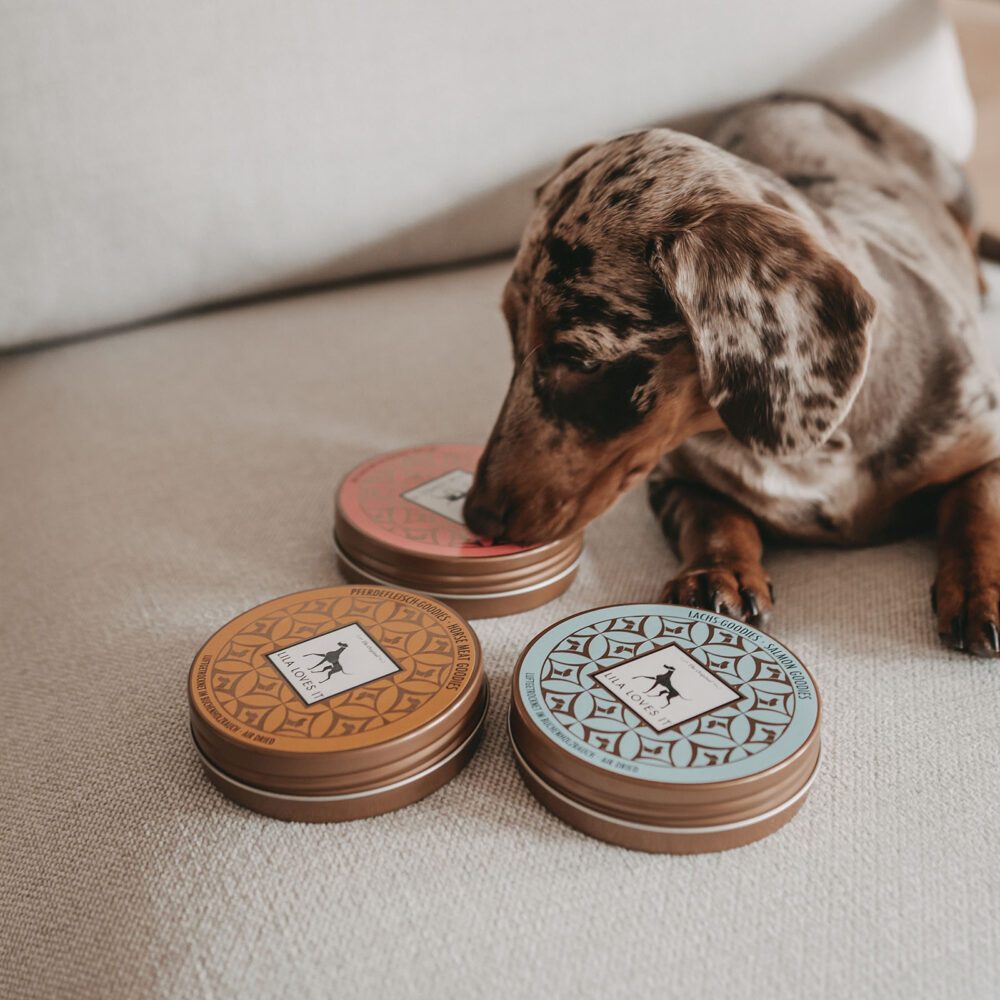