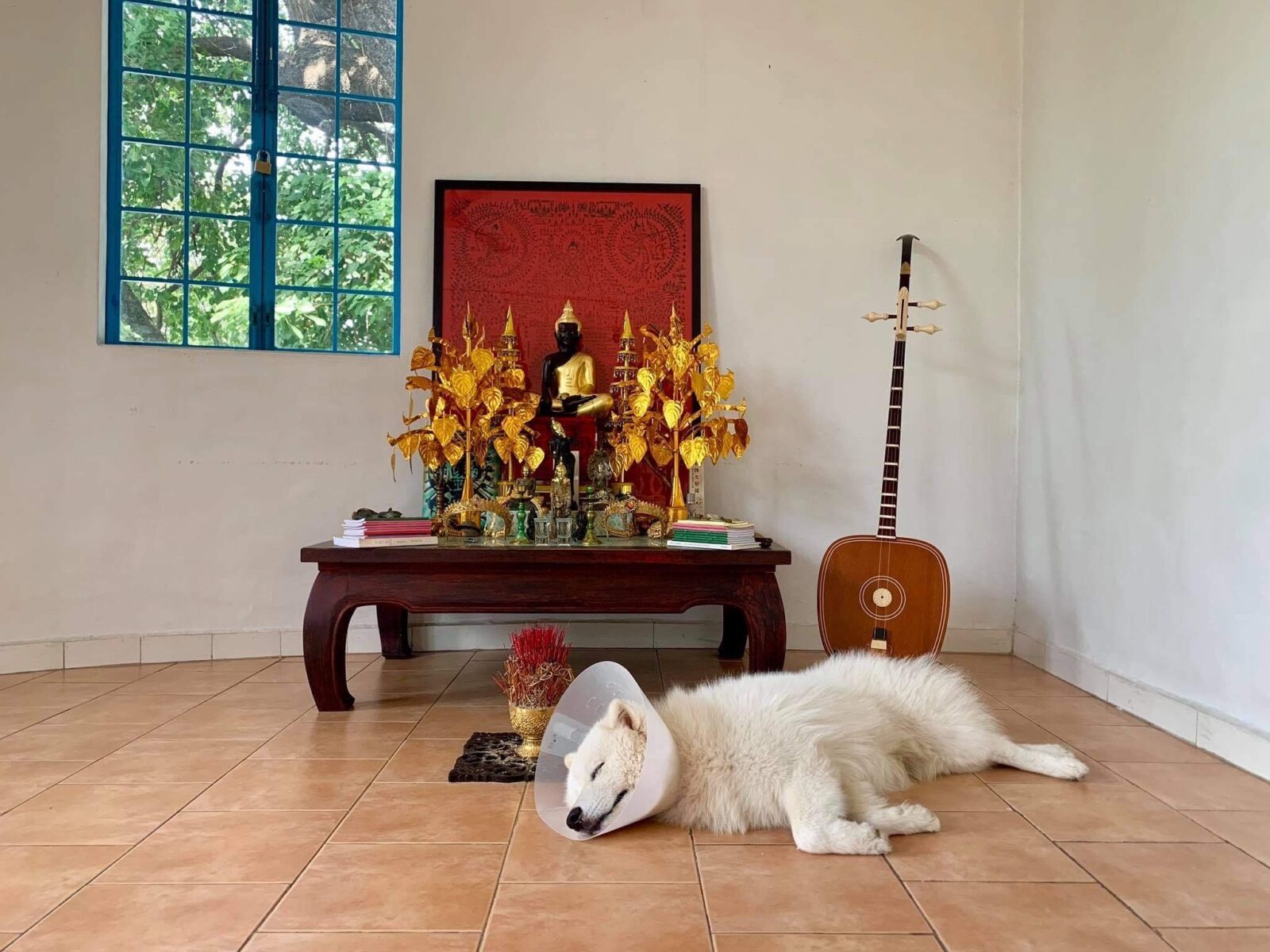 Suo Sdei, my name is Prumsodun Ok. I live in Phnom Penh, where I founded Cambodia’s first gay dance company. I work to uplift the ancient and vulnerable tradition of Khmer classical dance, all while empowering fifteen young men through rigorous training, leadership development, employment and poverty alleviation. By giving new life to our heritage—through the preservation and reinterpretation of old dances as well as the creation of groundbreaking works—these young men and I offer a new, exciting and dynamic face for Cambodia and for LGBTQ people locally and around the world.

Tell us about your dog. What’s his name? How old is he? Is he a particular breed or mix? What are his hobbies?

My Samoyed child’s name is Tosith. This is the Khmer romanization and shortened form of his full Sanskrit name which is Tusitaratna. Tusita means “joyous” and “contented,” but it is also the name of a heaven in Buddhist cosmology, one in which all bodhisattvas reside before taking birth on earth and attaining nirvana. Ratna means “jewel” or “gem.” So his name means “joyous jewel” or “contented gem,” and also by inference, “jewel who is the refuge of the future Buddhas.” He is also called Toshi-chan, as one of the most dearest persons in my life is Japanese. Some of Tosith’s favorite things to do are playing tug of war with the bath towel, especially as I am blow drying him, receiving massages from the grandma across the street, and going anywhere and everywhere with his fifteen elder brothers!

Since when do you live together? How did you meet?

I met Tosith through a friend, right before the start of a long lockdown in April 2020. It was a crazy time of being stuck at home with a teething and nippy child, unable to walk him outside and let him explore, potty training, and constant supervision lest the furniture and altar get destroyed. In those early days, I would mop down the apartment every single night!

Do you have a typical day? How does it look like?

I usually wake up around 6 AM without an alarm clock, as Tosith used to give a gentle bark around 5.45 AM every morning in his first period of arrival. But now I just come out at 6.30 and he’ll be excited for his morning walk. We usually walk along the riverside or through the neighborhood, giving him a chance to sniff and mark, and to play with his neighborhood friend, a golden retriever named Soga.

When we come back, he’s usually tired and goes back to sleep. And I water his elder plant brothers, make offerings, and begin stretching for my upcoming class. I’ll also answer emails or work on whatever creative project I have going on at the time. In this moment, on top of choreography, I’m currently consumed with two songs, as they are my first ventures into music production.

Tosith is usually calm during this time, but he’ll get very excited when his brothers (the dancers) arrive at 12.30. He follows them everywhere they go: as they are changing into their practice outfits, as they stretch, as they dance, and as they perform whatever daily task at hand. As altar boy and rehearsal assistant, he gets a lot of love and affection from them.

Class usually ends at 3.30 PM, in which I wind down for about an hour before taking Tosith to the local and only and soon to disappear dog park. We’ll also go to dog cafes SmartDog and Aigo where he can also run around and play with other canine friends. On days when I am tired or very busy, I’ll ask the dancers to take him out and they usually go for a walk in front of the royal palace. But usually, at the end of the day upon our return, Tosith and I stop to say hi to Soga and all of the aunties and uncles in the neighborhood. The neighborhood children always swarm and hug him with so much love. And he won’t go upstairs until he gets his massage from grandma across the street!

The day winds down at 7 PM, the AC and fan turned on. Tosith falls asleep in front of the altar. But he’ll wake up if he smells something delicious—no matter how sleepy he is, he can always eat!

How has living with a dog changed you, your life? How do experience your world differently? Does your world react differently to you since you are with dog?

I will not lie. It was so tough at first when Tosith first arrived. I was constantly questioning my decision and ability to take in and care for another life, furious when a neighbor’s cat scratched him and crying when he started limping from a fall. Most of all, I felt like I had diverged from my path as an artist, my hands which had been molding and sculpting the next generation of Khmer dance stars now occupied with cleaning up pee and poo and apartment daily. On my lowest days, I thought to myself: Am I an artist or someone who takes care of dogs? Because I require proper aloneness for reflection and creation.

But things got easier as Tosith matured, especially when he stopped teething and was potty trained. He’s been a force of love and unity in my life, bringing my students and I closer together in our care of him. Furthermore, he’s brought me closer to my neighbors and community, who often smile when they see him and play with him. They strike conversations with me that would otherwise not happen, as I am an inherently shy person who only keeps to myself and trusted friends. Truly, Tosith is a jewel who has brought joy to so many people’s lives! Without even trying, he has brought so many people together and given me a newfound sense of home and community!

How has your dog helped you to navigate the multiple challenges brought about by Corona?

Ultimately, Tosith has been a grounding force in my life. He has taught me how to monitor my emotions, which can now go from 0 to 100 and to 0 instantly. The back down to 0 is important, as I’ve learned to let go of tension in my heart in training him. Furthermore, he’s been a beautiful opportunity to reflect on life, love, relationship, and guardianship, as well as nature, instinct, desire, and necessity too. When he comes to sleep on my feet as I work, as we listen to music by Paul Kim together, I know that I made the right decision. And I tell myself that I must do everything to protect his precious life, and to give him the most beautiful life possible.